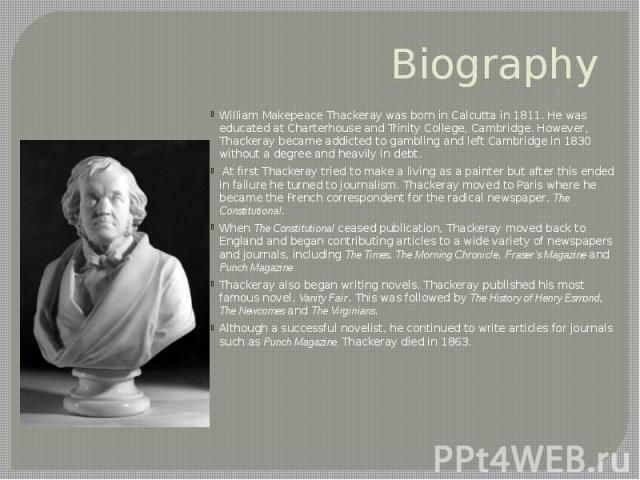 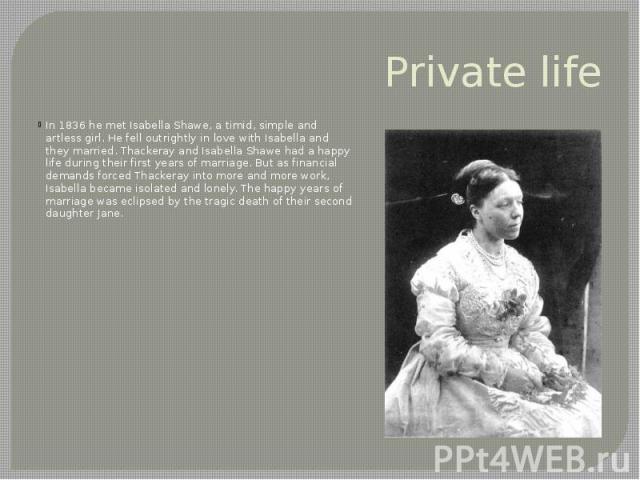 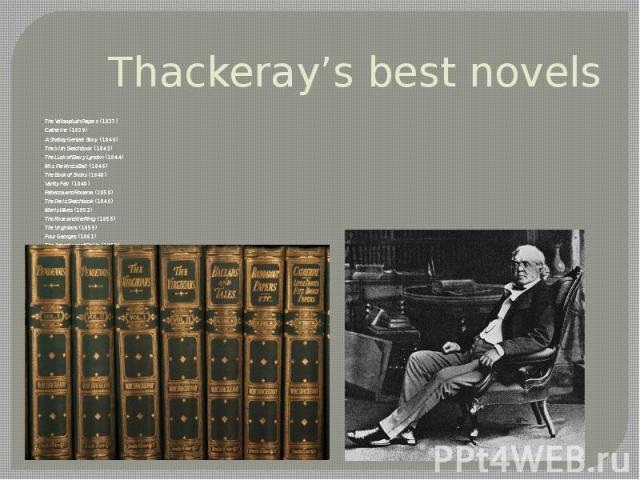 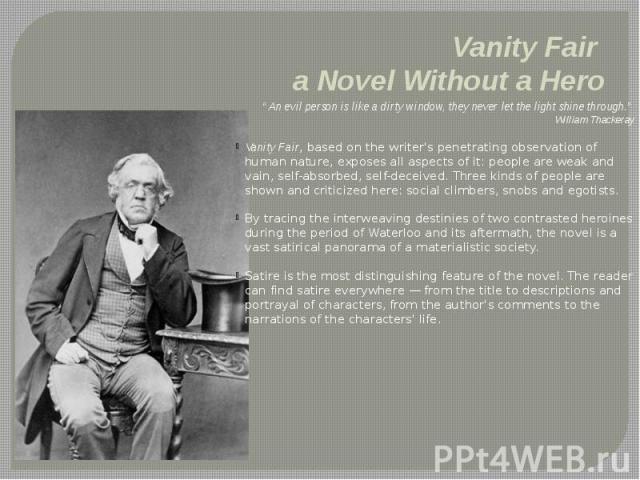 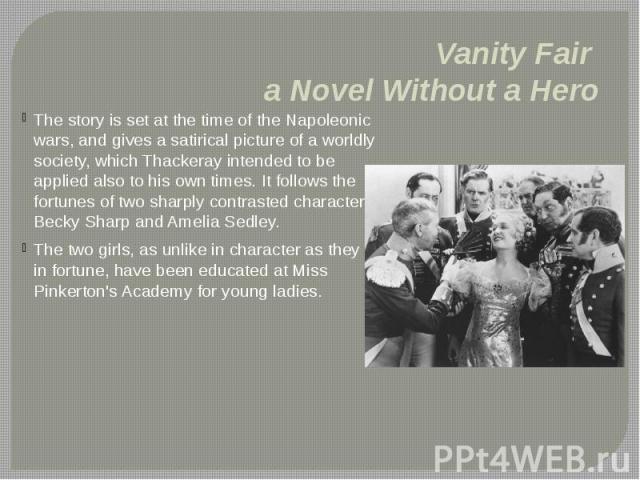 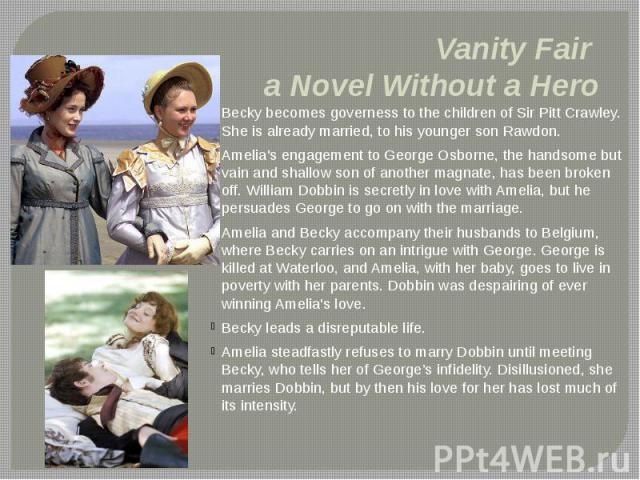 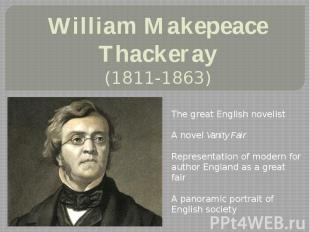 William Makepeace Thackeray (1811-1863) The great English novelist A novel Vanity Fair Representation of modern for author England as a great fair A panoramic portrait of English&nbsp;society 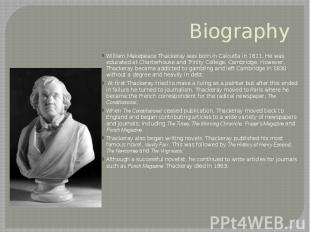 Biography William Makepeace Thackeray was born in Calcutta in 1811. He was educated at Charterhouse and Trinity College, Cambridge. However, Thackeray became addicted to gambling and left Cambridge in 1830 without a degree and heavily in debt. At first Thackeray tried to make a living as a painter but after this ended in failure he turned to journalism. Thackeray moved to Paris where he became the French correspondent for the radical newspaper, The Constitutional. When The Constitutional ceased publication, Thackeray moved back to England and began contributing articles to a wide variety of newspapers and journals, including The Times, The Morning Chronicle, Fraser's Magazine and Punch Magazine. Thackeray also began writing novels. Thackeray published his most famous novel, Vanity Fair. This was followed by The History of Henry Esmond, The Newcomes and The Virginians. Although a successful novelist, he continued to write articles for journals such as Punch Magazine. Thackeray died in 1863. 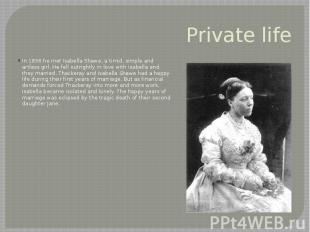 Private life In 1836 he met Isabella Shawe, a timid, simple and artless girl. He fell outrightly in love with Isabella and they married. Thackeray and Isabella Shawe had a happy life during their first years of marriage. But as financial demands forced Thackeray into more and more work, Isabella became isolated and lonely. The happy years of marriage was eclipsed by the tragic death of their second daughter Jane. 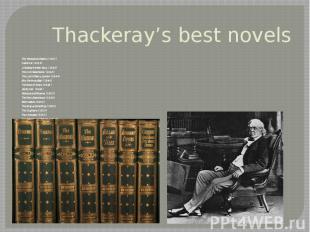 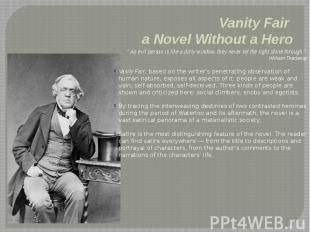 Vanity Fair a Novel Without a Hero 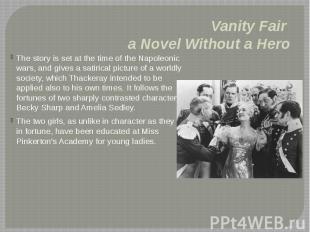 Vanity Fair a Novel Without a Hero The story is set at the time of the Napoleonic wars, and gives a satirical picture of a worldly society, which Thackeray intended to be applied also to his own times. It follows the fortunes of two sharply contrasted characters - Becky Sharp and Amelia Sedley. The two girls, as unlike in character as they are in fortune, have been educated at Miss Pinkerton's Academy for young ladies. 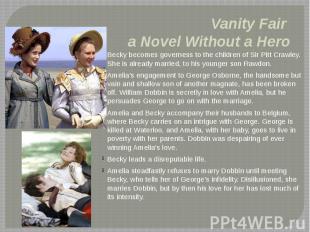 Vanity Fair a Novel Without a Hero Becky becomes governess to the children of Sir Pitt Crawley. She is already married, to his younger son Rawdon. Amelia's engagement to George Osborne, the handsome but vain and shallow son of another magnate, has been broken off. William Dobbin is secretly in love with Amelia, but he persuades George to go on with the marriage. Amelia and Becky accompany their husbands to Belgium, where Becky carries on an intrigue with George. George is killed at Waterloo, and Amelia, with her baby, goes to live in poverty with her parents. Dobbin was despairing of ever winning Amelia's love. Becky leads a disreputable life. Amelia steadfastly refuses to marry Dobbin until meeting Becky, who tells her of George’s infidelity. Disillusioned, she marries Dobbin, but by then his love for her has lost much of its intensity. 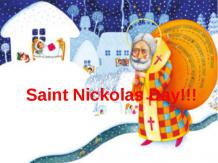 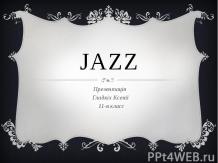 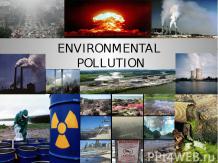 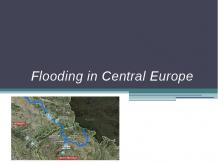 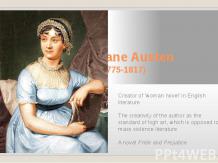 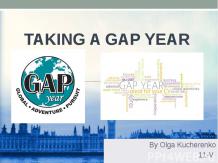 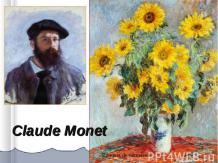 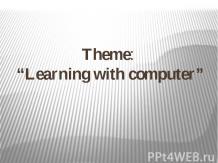 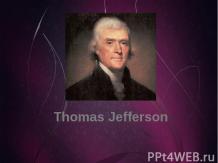 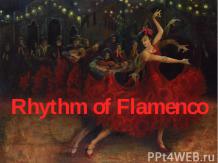 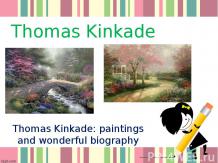