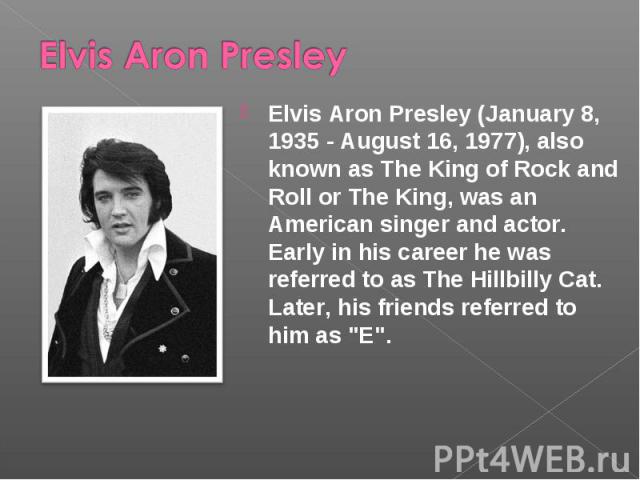 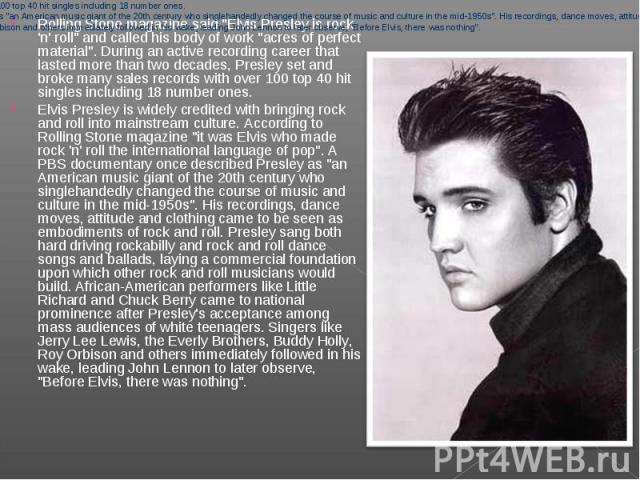 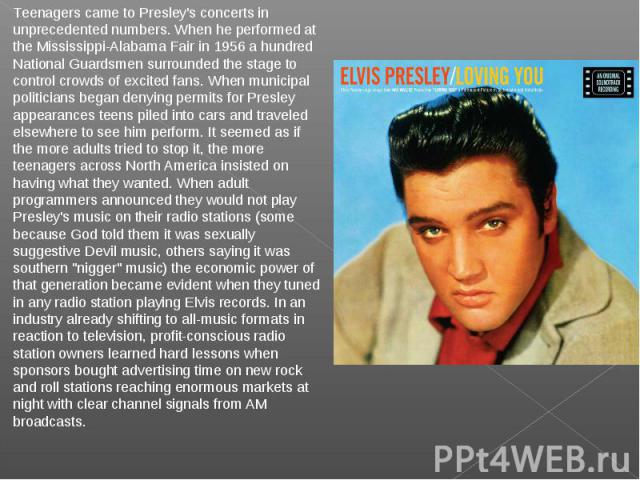 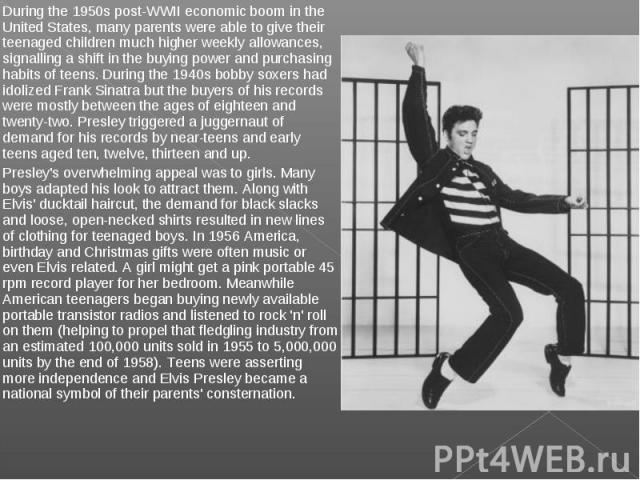 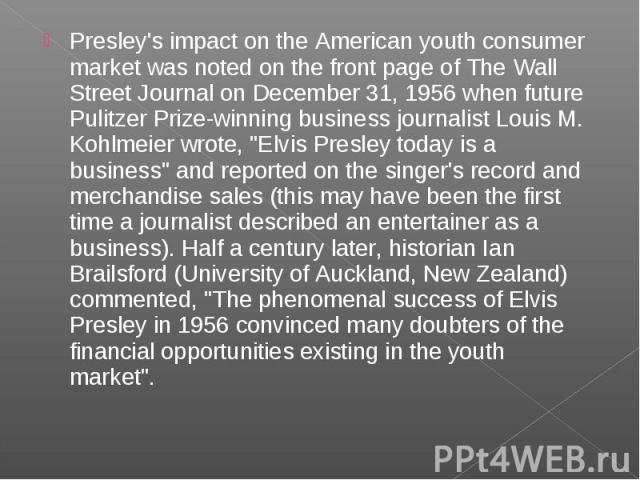 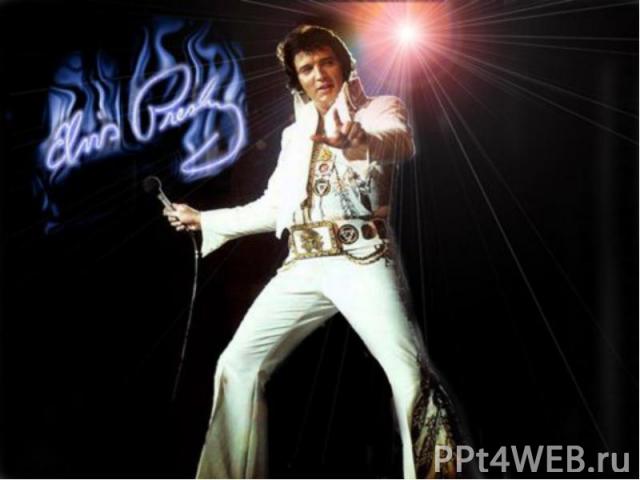 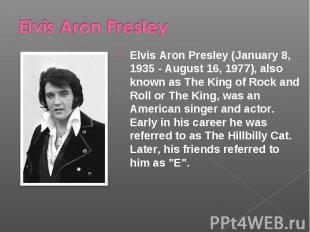 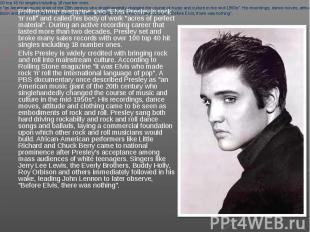 Rolling Stone magazine said "Elvis Presley is rock 'n' roll" and called his body of work "acres of perfect material". During an active recording career that lasted more than two decades, Presley set and broke many sales records with over 100 top 40 hit singles including 18 number ones. Elvis Presley is widely credited with bringing rock and roll into mainstream culture. According to Rolling Stone magazine "it was Elvis who made rock 'n' roll the international language of pop". A PBS documentary once described Presley as "an American music giant of the 20th century who singlehandedly changed the course of music and culture in the mid-1950s". His recordings, dance moves, attitude and clothing came to be seen as embodiments of rock and roll. Presley sang both hard driving rockabilly and rock and roll dance songs and ballads, laying a commercial foundation upon which other rock and roll musicians would build. African-American performers like Little Richard and Chuck Berry came to national prominence after Presley's acceptance among mass audiences of white teenagers. Singers like Jerry Lee Lewis, the Everly Brothers, Buddy Holly, Roy Orbison and others immediately followed in his wake, leading John Lennon to later observe, "Before Elvis, there was nothing". 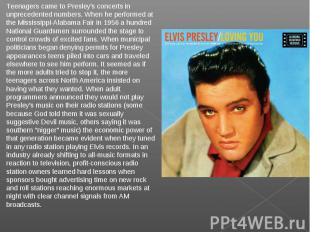 Teenagers came to Presley's concerts in unprecedented numbers. When he performed at the Mississippi-Alabama Fair in 1956 a hundred National Guardsmen surrounded the stage to control crowds of excited fans. When municipal politicians began denying permits for Presley appearances teens piled into cars and traveled elsewhere to see him perform. It seemed as if the more adults tried to stop it, the more teenagers across North America insisted on having what they wanted. When adult programmers announced they would not play Presley's music on their radio stations (some because God told them it was sexually suggestive Devil music, others saying it was southern "nigger" music) the economic power of that generation became evident when they tuned in any radio station playing Elvis records. In an industry already shifting to all-music formats in reaction to television, profit-conscious radio station owners learned hard lessons when sponsors bought advertising time on new rock and roll stations reaching enormous markets at night with clear channel signals from AM broadcasts. 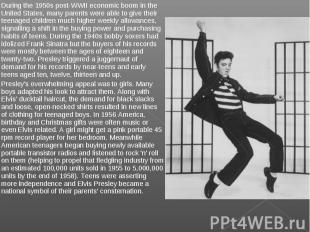 During the 1950s post-WWII economic boom in the United States, many parents were able to give their teenaged children much higher weekly allowances, signalling a shift in the buying power and purchasing habits of teens. During the 1940s bobby soxers had idolized Frank Sinatra but the buyers of his records were mostly between the ages of eighteen and twenty-two. Presley triggered a juggernaut of demand for his records by near-teens and early teens aged ten, twelve, thirteen and up. Presley's overwhelming appeal was to girls. Many boys adapted his look to attract them. Along with Elvis' ducktail haircut, the demand for black slacks and loose, open-necked shirts resulted in new lines of clothing for teenaged boys. In 1956 America, birthday and Christmas gifts were often music or even Elvis related. A girl might get a pink portable 45 rpm record player for her bedroom. Meanwhile American teenagers began buying newly available portable transistor radios and listened to rock 'n' roll on them (helping to propel that fledgling industry from an estimated 100,000 units sold in 1955 to 5,000,000 units by the end of 1958). Teens were asserting more independence and Elvis Presley became a national symbol of their parents' consternation. 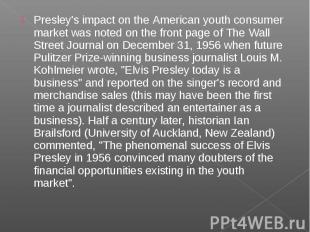 Presley's impact on the American youth consumer market was noted on the front page of The Wall Street Journal on December 31, 1956 when future Pulitzer Prize-winning business journalist Louis M. Kohlmeier wrote, "Elvis Presley today is a business" and reported on the singer's record and merchandise sales (this may have been the first time a journalist described an entertainer as a business). Half a century later, historian Ian Brailsford (University of Auckland, New Zealand) commented, "The phenomenal success of Elvis Presley in 1956 convinced many doubters of the financial opportunities existing in the youth market". 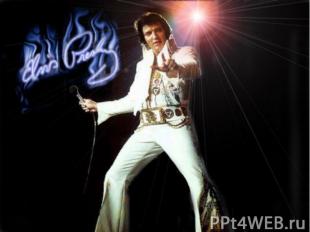 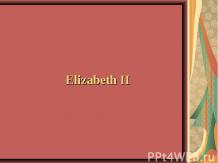 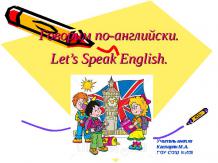 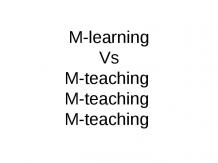 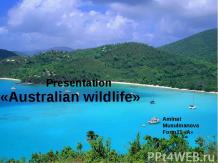 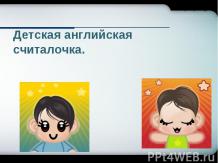 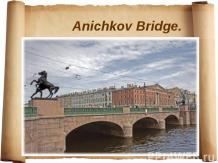 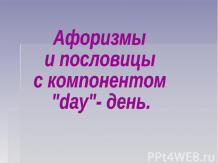 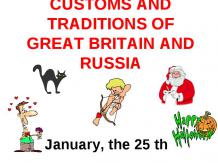 Customs and traditions of great britain and russia 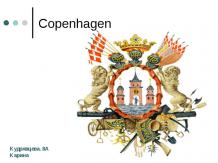 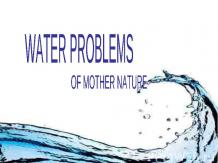 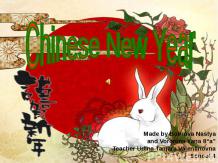 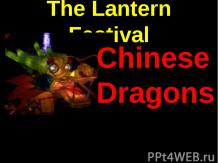